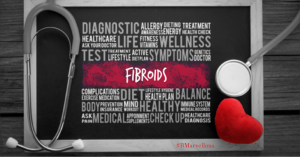 First thing to know is that fibroids are non-cancerous growths that develop in or around the womb (uterus).

The growths are made up of muscle and fibrous tissue, and vary in size. They’re sometimes known as uterine myomas or leiomyomas.

Many women are unaware they have fibroids because they don’t have any symptoms.

Second thing to know is that they are VERY common with over 70 % of women who will develop uterine fibroids at some point, although only 25 % will cause symptoms which may include :

Third thing to know is that only in rare cases, which lead to further complications, fibroids can affect pregnancy or cause infertility. Fibroids affecting fertility really depends on the number, location, and size of the fibroids.

As fibroids don’t often cause symptoms, they’re sometimes diagnosed by chance during a routine gynaecological examination, test or scan.

See your GP if you have persistent symptoms of fibroids so they can investigate possible causes.

If your GP thinks you may have fibroids, they’ll usually refer you for an ultrasound scan to confirm the diagnosis.

The exact cause of fibroids is unknown, but they have been linked to the hormone estrogen.

Fibroids usually develop during a woman’s reproductive years (from around the age of 16 to 50) when estrogen  levels are at their highest.

They tend to shrink when oestrogen levels are low, such as after the menopause when a woman’s monthly periods stop.

Fibroids are common, with around 1 in 3 women developing them at some point in their life. They most often occur in women aged 30 to 50.

Fibroids are thought to develop more frequently in women of African-Caribbean origin.

It’s also thought they occur more often in overweight or obese women because being overweight increases the level of estrogen in the body.

Women who have had children have a lower risk of developing fibroids, and the risk decreases further the more children you have. 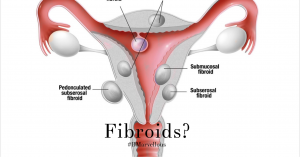 The main types of fibroids are:

intramural fibroids – the most common type of fibroid, which develop in the muscle wall of the womb

In some cases, subserosal or submucosal fibroids are attached to the womb with a narrow stalk of tissue. These are known as pedunculated fibroids.

Fibroids don’t need to be treated if they aren’t causing symptoms. Over time, they’ll often shrink and disappear without treatment, particularly after the menopause.

If you do have symptoms caused by fibroids, medication to help relieve the symptoms will usually be recommended first.

There are also medications available to help shrink fibroids. If these prove ineffective, surgery or other, less invasive procedures may be recommended.